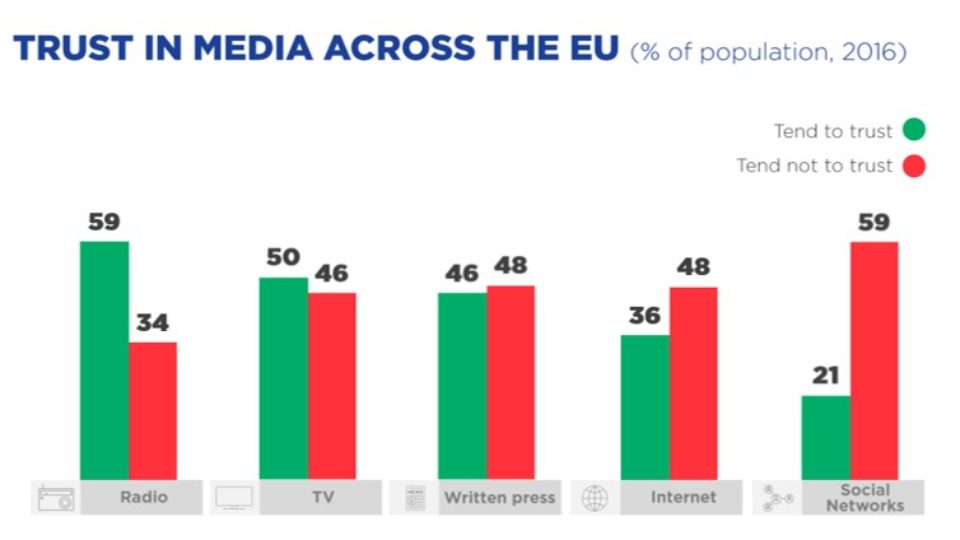 Europeans’ find news from traditional media more trustworthy than news from social medias. That is the key finding in a fresh Eurobarometer survey – “Trust in Media 2017”.

The survey shows, that during the latest five years, more people question the truth about what they see and read online. Radio and TV are still the most trusted medias across Europe. Radio is perceived as credible by 59 percent of EU citizens, closely followed by TV by 50 percent. In the last five years, confidence in both media has grown throughout Europe.

The confidence in news from print medias increases

Confidence in the print medias has also increased during the last five years, although they are generally not seen as reliable medias in most European countries.

The Eurobarometer survey also shows the “net trust” of the individual media categories – that is, share of citizens who believe they can trust the media, less those who think they cannot.

“Trust in Media 2017” confirms what we already know. Our customers also feel it when positive editorial coverage in radio, television and print media rise the pride among their employees. Or, when a major article in a nationwide media makes their phone ring, because new customers and collaborators gain awareness and interest in their business.

At Grønbech we are experts in helping companies getting their good stories told in traditional medias like newspapers, magazines and electronic media. In 2017 we provided more than 600 editorial reviews to our customers.

Find the full confidence in the Media 2017 report here